Frank came to London from Guyana in 1953 and as a political activist, he joined West Indian Standing Conference.

He later attended a Trade Union Congress conference and heard from a Fire Brigades Union (FBU) delegate that black people ‘were not employed by the fire service’.

He applied and joined West Ham Fire Brigade in 1955 and served at Silvertown Fire Station. Frank was the first full-time black firefighter and quite possibly the first in the country. 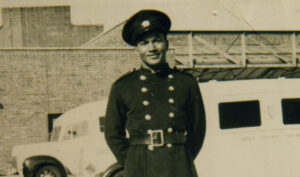 Frank was active in the Fire Brigade Union and became branch secretary at his station.

In 1965 he left the Brigade to become a social worker and the first black legal advisor to black youths at Marylebone Magistrates Court.

Frank was asked for his thoughts on his career in a 2007 Brigade booklet called ‘In their own words’ – a history of black and Asian staff in the London Fire Brigade.

He said: “I was told that the authorities were not hiring black men because they were not strong enough physically or well enough educated to do the job.

“I immediately recognised racism and said I’m going to apply to be a firefighter and see if they find me unfit.

“I saved a fellow firefighter’s life when he fainted while we were on the fifth floor of a ladder drill session.

Frank sadly passed away on December 2, 2015, six days after his 90th birthday.

In November 2020, was remembered with his very own Google Doodle on what would have been his 95th birthday.