Read all about it! #Raise Your Hand Campaign success

Schools out for summer and it’s a wrap on our Media Cubs #RaiseYourHand campaign.

Our mini reporters have led a successful campaign over the past few weeks to encourage primary school kids across the country to share their questions with the Prime Minister Boris Johnson, and other leaders, about the pandemic and be part of conversations that will shape their future.

Now, more than 100 questions have now been collected up and will be sent to Downing Street.

And what a journey it has been to get to this point!

The mini reporters have had 40 pieces of print or online news coverage for their campaign from Sale to South Wales!

They approached the Cabinet Office to go on the Daily Briefing and even had support from national news outlets who said they would give up their slot. This was declined so they sent their own video questions to the PM – but they have so far still not had a response, but are staying positive that their letters will get acknowledged.

Media Cub Jack took on his first voiceover role with our new manifesto, and Media Cub Frankie became the face of our campaign with her very own billboard in Manchester City Centre. 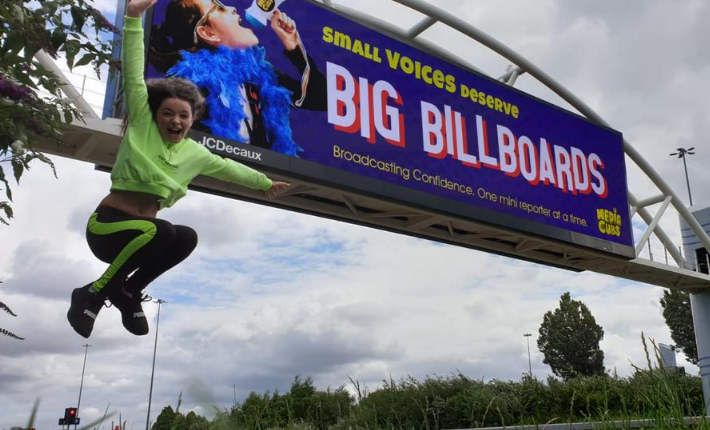 One of the campaign leaders, Aisya, aged 11, said: “The campaign was so important to us and we want to thank everyone that supported us, our friends, other kids, our parents, teachers, journalists who we see as role models and the leaders who took the time to talk to us and answer our questions – and agreed that we should have been asked at the start of the pandemic what we thought.

“My opinions should matter, we should always be a part of big conversations – we are small – but what we think matters and we might think about a good way to do something that a grown-up doesn’t.”

Our Media Cubs leader Kirsty added: “This year, we have seen kids begin to value their voices through protests about climate change and Black Lives Matter. They have raised their hands and their voice to express their opinions, and we want this to continue.

“And this group of mini reporters had strong opinions and burning questions for the Prime Minister about their education, sport, and their futures post-pandemic, so we supported them to make sure they got answers, so they grow up knowing their opinions count.

“We are so proud of all of them and how they are now broadcasting confidence.

“A big thank you goes to everyone that supported the campaign and those who stepped forward to really listen to these young people.

“It is a shame that the Prime Minister is still not taking them seriously and seems to be running scared from our 11-year-old reporters. We will look forward to him getting his post and watch this space for a response.”